It's Wednesday. Yesterday was Tuesday. Tutorial Tuesday to be exact. Only the second one ever. As you can tell, I missed it.

Today, I am attempting to make up for my poor time management skills by doing a Tutorial Wednesday. (Just doesn't have the same ring to it, does it?) Well, I have discovered that Tutorial Wednesday is a flop. A big flop, to be exact.

I had big plans for this, make-up day: I was going to make cute little picturesque mini fruit pies. Sounds delightful, right? Like your typical recipe blog post? Wrong. 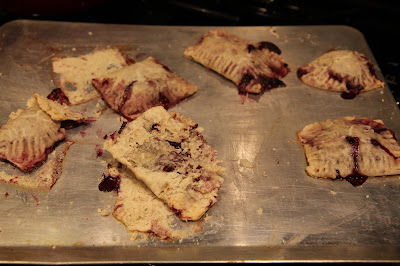 Look at that carnage. Pretty bad, right? These "cutesy little pies" (or, as my mother and I prefer to call them, Lil' Craps) took me two hours to mess up. I found a pie crust recipe. The pie crust recipe was horrible, but I kept on. I made a mixed berry sauce. It proceeded to be thin and sugary. I stuffed that dense crust full of my diabetic sauce, put some little fork marks around the edges to at least try to make them look somewhat blogger-ish, popped those suckers in the oven and hoped that they would turn out in the end. 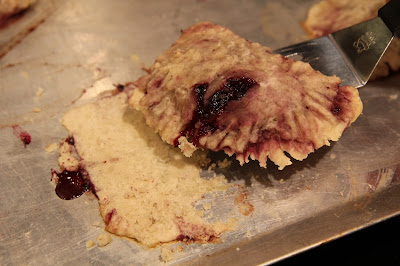 As you can tell, they didn't.

The Lil' Craps were heavy-duty cemented to the baking sheet. A crowbar, sledgehammer, WD-40, and a lightsaber eventually got them off the pan (which was immediately drenched in Mr. Clean spray and sent off to therapy) and we tried them. Very bad idea. They tasted like cardboard soaked blue Kool-Aid. I'm guessing, by now, you can see why they have been deemed the Lil' Craps.

Oh well, I'm only human! At least it was fun to ridicule them.

Next week, I'll come back swinging with a killer T.T.!

Hannah
Aspiring violinist/homeschooled high school freshman. That sums it up.